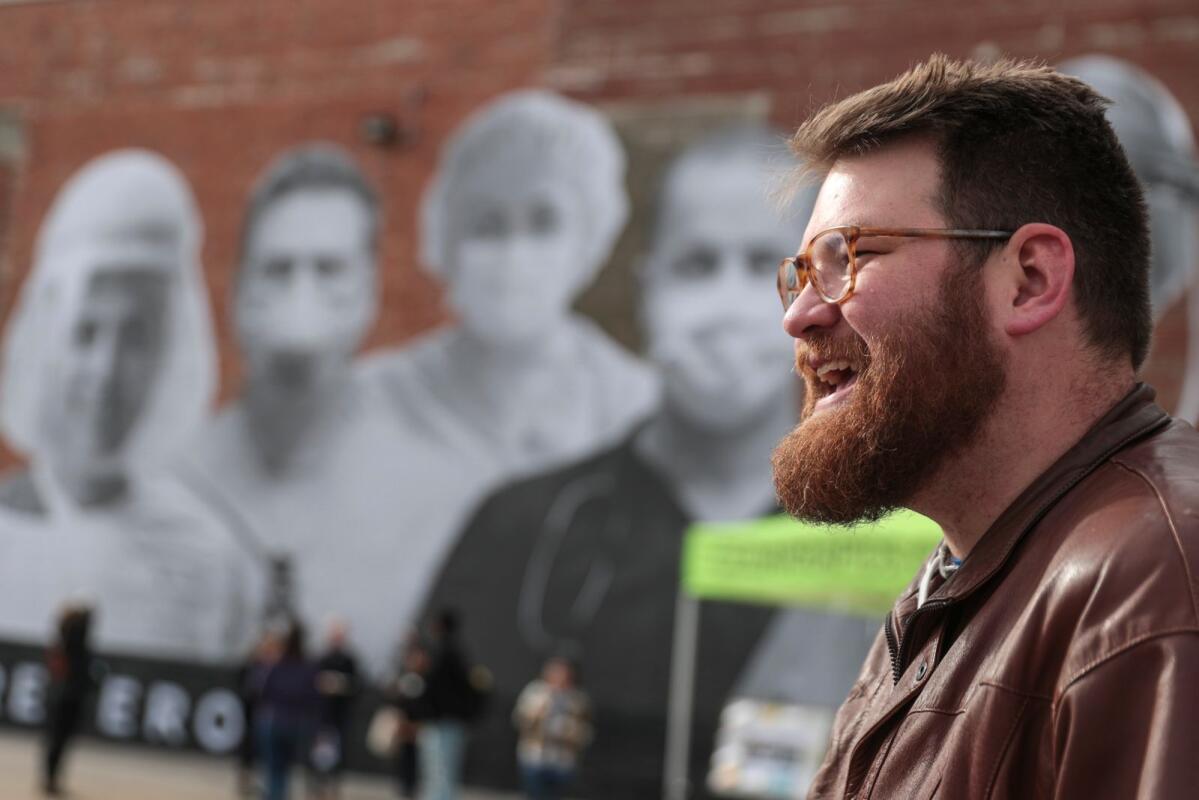 Gallery supervisor Bex Hurn retains up the last rendering of the Healthcare Heroes mural as it was being built on Oct. 31 in Cedar Rapids. (Geoff Stellfox/The Gazette)

Artist Isaac Campbell commences to roll the closing number of sheets of his Health care Heroes mural on to the wall Oct. 31. The mural is at the corner of Fifth Street SE and Third Avenue SE in Cedar Rapids. (Geoff Stellfox/The Gazette)

Dr. Hassan Sajjad, one particular of the wellbeing treatment staff featured in the mural, speaks to attendees at the mural’s unveiling, on Monday. (Geoff Stellfox/The Gazette)

CEDAR RAPIDS — As the world techniques two years in a pandemic, 1 new mural experiencing the MedQuarter places a information in black and white for both of those health care personnel and the local community they treatment for.

As mask mandates fade, in-person occasions resume and the vaccinated populace bit by bit grows, the war health and fitness care personnel have fought on the front strains for 20 months is considerably from over inside hospitals. As the entire world longs to resume the daily life it understood in advance of March 2020, overall health treatment staff return working day immediately after day to set on the exact protective equipment they’ve been toiling underneath for months.

“Visually, the pandemic is not pretty existing any far more in our communities. We assume anything is fantastic and superior,” reported artist Isaac Campbell, the mural’s creator. “Then you acquire a stage inside of hospitals, and it is unquestionably not better.”

As well being care staff continue on to fight versus an invisible enemy mainly without having the gratitude they acquired toward the commencing of the pandemic, the mural on the former Gazette setting up at the corner of 3rd Avenue SE and Fifth Avenue SE many thanks them for their tireless sacrifice.

Commissioned in partnership with the Cedar Rapids Downtown District and Bex Hurn, owner of On Perspective Gallery, the mural reveals five wellness

automotive pro guide
We use cookies on our website to give you the most relevant experience by remembering your preferences and repeat visits. By clicking “Accept All”, you consent to the use of ALL the cookies. However, you may visit "Cookie Settings" to provide a controlled consent.
Cookie SettingsAccept All
Manage consent